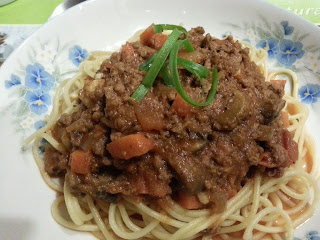 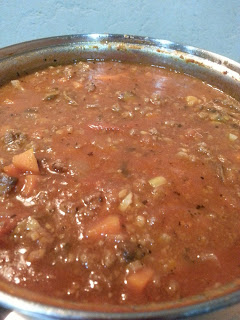 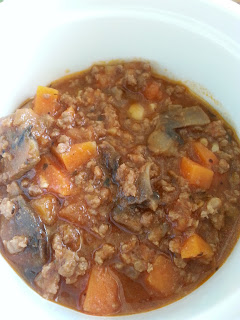 The first time I learnt to cook bolognese sauce was 15years ago when I first this cook book called Family Meals from a cheap sale. Back then I was working. After lunch my colleagues and I like to go shopping in the industrial building near my office. In one of the GSS , I browsed through many cook books and found this book which has simple recipes and cost only $5. I bought it because it was cheap. Eversince then I have been doing this bolognese sauce. Now I no longer need to refer to the book when I cook this sauce. And of course I have also modified the recipe to our taste. We have bolognese Spaghetti very often because my children love all kinds of pasta.

Method for sauce:
1  Add meat seasoning into meat and mix well and set aside.

3. Add pasta sauce and remaining of the ingredients and seasoning to taste. (You may replace light soy sauce with salt if you do not like using light soy sauce)

4  Bring bolognese sauce to simmering point, keep stirring. Then cover and simmer over low heat for an hour. Stir occasionally to prevent sauce get burn. You may transfer sauce to cook in slower cooker if you do not have time in the kitchen. That is instead of simmer over low heat, cook it in slow cooker.

Method for spaghetti:
1. Boil water in a big pot. Add salt. When water is boiled,  put in the spaghetti.  Boil it according to the packet instructions.  Most spaghetti instructions stated 13min. But I like spaghetti not too soft. I like "al dente" texture. So I usually undercooked the spaghetti. That is, I reduce the cooking time to 8min.  Test a strand of spaghetti and it doesn't have powdery taste but hard.

3. Turn into serving dish and top the Bolognese sauce. You can sprinkle with parmesan cheese.

Posted by Catherine Journal at 00:40

Email ThisBlogThis!Share to TwitterShare to FacebookShare to Pinterest
Labels: Pasta and Noodle